A big congratulations to Craig Radley and ALL members of the Swim Team (names listed below) who won the ACC Swimming Championships on Thursday 27 February 2020.

One of the highlights of the night was a new ACC record set by Finley Cousins in the Under 17 50m Breaststroke.

The amazing statistics are:

Thanks to all the staff who attended last night and a special thanks to Georgie Worland, Olivia Guglielmino  and Jessica Kirk who have helped Craig out with the preparation of the team.

Our students represented us brilliantly last night, so please congratulate any boy who you know is part of the team! 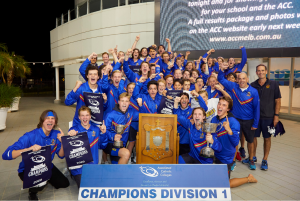